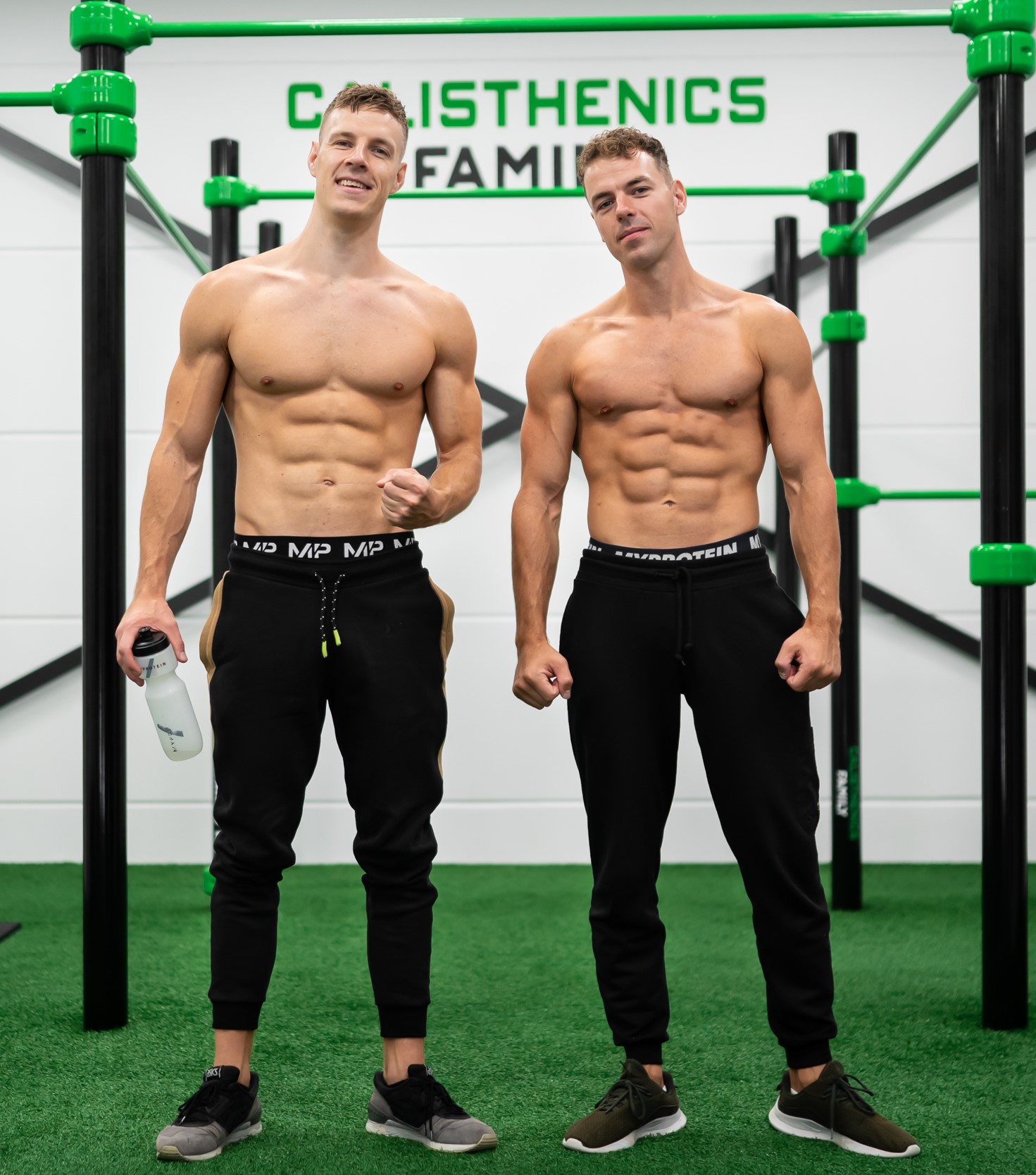 We are brothers: Yannick (left) and Michael (right). We founded Calisthenics Family in 2017. Our passion for Calisthenics started at the beginning of 2016 and we switched completely from fitness to the challenging sport Calisthenics. We no longer found bodybuilding and weightlifting challenging.

In the first year, we learned a lot about the sport Calisthenics. After many trials, mistakes, and trying out different training methods, we managed to create an effective and successful training method to learn Calisthenics step by step. After achieving various skills such as the muscle-up, the handstand, and the human flag, we decided to help and coach as many people as possible in achieving their personal goals. We still do this every day with great pleasure and energy! 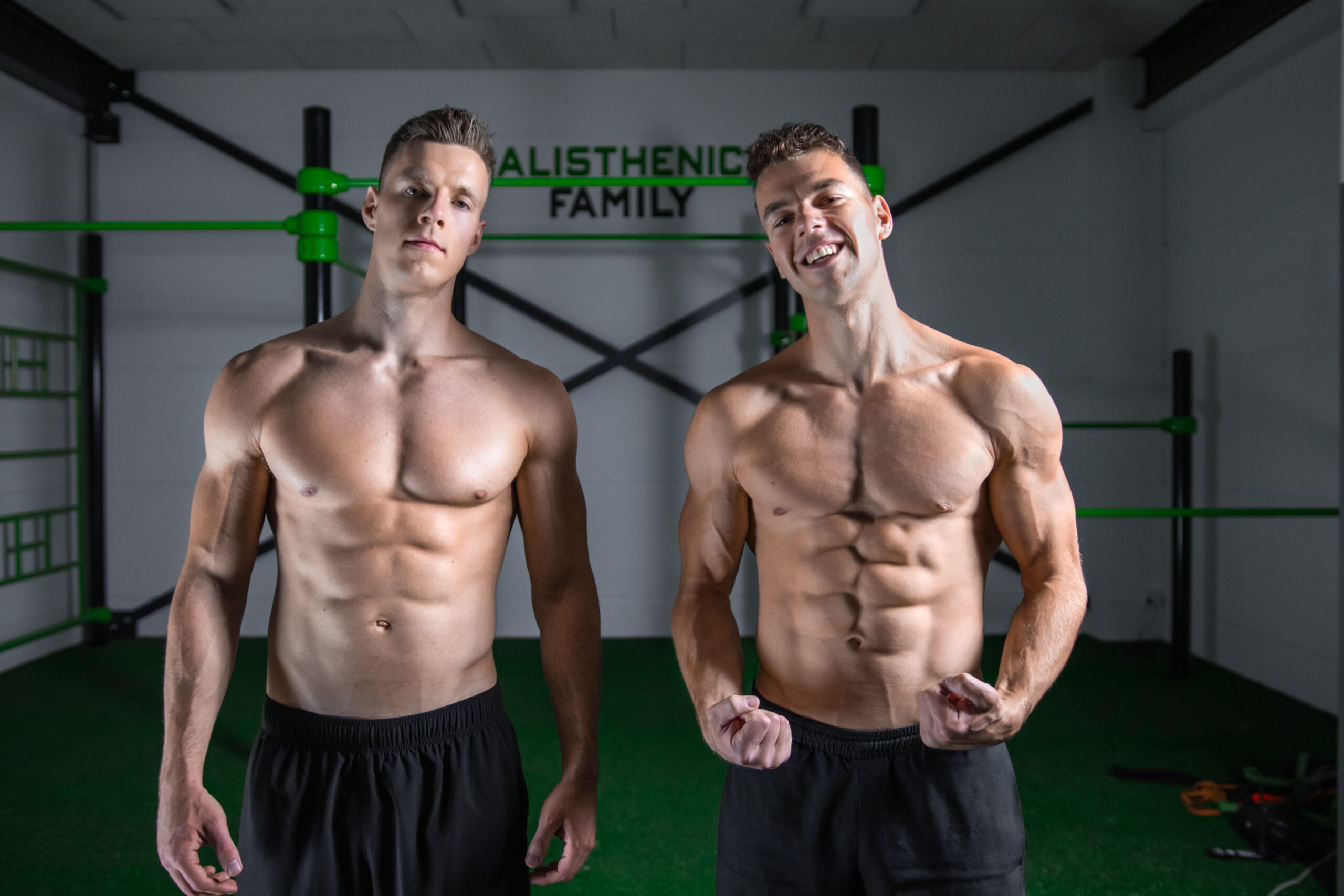 ”Our mission is to show as many people as possible all the great benefits of Calisthenics, help them achieve their goals, and connect like-minded athletes within the ‘Calisthenics Family’ where moving forward together is key.”

An athletic body and great skills
By doing Calisthenics you’ll not just get a lean aesthetic body, but it will enable you to control your body and mind 100%. You create real functional strength and you’re able to perform impressive skills. These capabilities make us, and everyone associated with Calisthenics Family, unique and invincible.

Certified Calisthenics Trainers
To achieve our mission, we have gained additional knowledge by obtaining a certified Calisthenics diploma at the Calisthenics Training Institute (the COI). During this course, we learned the most important aspects of training and coaching specifically focused on Calisthenics. We have learned about the anatomy and physiology of the body, the principles of training and adaptation of the body such as progressive overload, reversibility, the step-by-step approach of creating physical strength, the principles of teaching, (online) coaching, injury prevention, and the importance of nutrition in combination with Calisthenics.

What we do
We provide international 1-on-1 online coaching, we help people with online workouts plans and courses, and we share valuable content on Instagram and YouTube (150K+ subscribers). We have already helped thousands of people worldwide with achieving their goals. We are very proud of this and are grateful for the unconditional support of our Calisthenics Family members and our loyal followers. 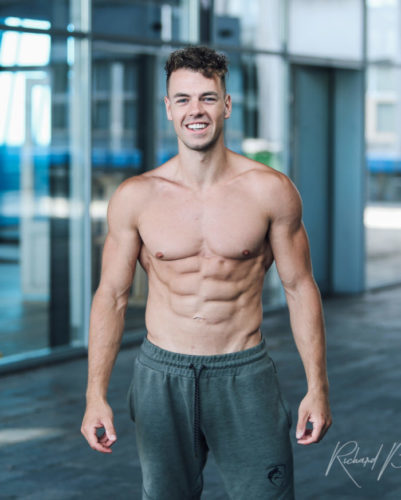 My greatest passion is to help people to achieve their dreams. I have always known that I wanted to work with people by giving them real support and guidance. I truly believe that every person can realize their goals, but only with the right tools, effort, and good support. Calisthenics has changed my life and my mission is to change yours as well! I did not only gain a better body and learned some epic skills, but I actually got more confident and happier in life by living a healthier and more enjoyable lifestyle. The process of moving forward together gives me so much joy and energy in life that it became an addiction to me. So, are you ready to change your life? Let me help you! 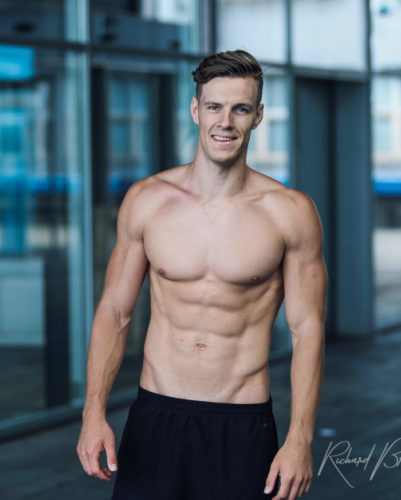 At a young age, I started lifting weights in the gym. I have always been fascinated by human strength. During that time I had been focusing more on strength-building rather than bodybuilding. After a few years of training like this, I noticed that I gained a lot of strength but I wasn’t flexible at all. I wanted to actually do something with the strength that I gained instead of just lifting weights. That’s where Calisthenics came in and it literally changed my life. Not only because I have learned how to fully control my own bodyweight by doing awesome skills, but everything that comes with it, such as the close Calisthenics Community and connection that I experience with everyone. This sport really opened my eyes. My mission is therefore to help as many people as possible with their Calisthenics Journey! 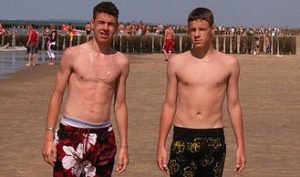 The start of our fitness journey

We started with fitness in 2012. The goal was to get a better body by getting more muscular. We did this because we thought we were pretty skinny. We were about 16 years old at the time…

The first year we spent a lot of time together in the gym but we didn’t really see the results we wanted to see. We started following different routines of bodybuilders and started the so called “bulking period” to gain mass. So we started to eat a lot of calories in order “to build more muscle”. Slightly on we got stronger and built more muscle, but at the same time, we got fat. So instead of getting the aesthetic body that we wanted, we got blown up and felt not functional at all… 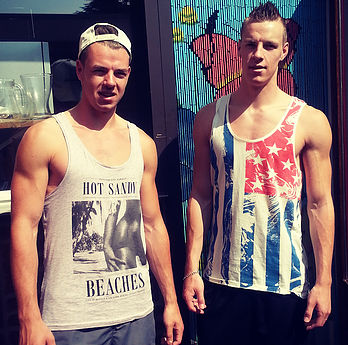 Getting rid of that bodyfat

We kept doing fitness for another year. We started our “cutting period” and did cardio at least 3 times a week on the treadmill. We didn’t like doing it, but we needed to lose our body fat. After a year of sweating, we lost almost all the fat and we were “ready” for the summer…

So after 2 years of working our asses off in the gym, we started to see better results and built some kind of muscle mass. The summer was over and the whole bulking/cutting process started all over again. At a certain point, we didn’t find it challenging enough to keep doing this and we asked ourselves the questions: “What are we actually doing? Putting so much time into the gym and for what? To get a better body? For who? Myself? To impress the ladies? And do we actually still even like it?”.

We noticed that we did not find weightlifting challenging enough anymore and we definitely didn’t have the dream of becoming a huge bodybuilder. We actually started to find fitness boring. Doing the same exercises all the time with the only purpose of just lifting more weights. We actually didn’t care anymore whether we could bench press or squat 80KGs, 100KGs, or even 120KGs. There was no end goal, nothing to strive towards in the long run. Do you get the point? So at a certain point, we were absolutely not motivated and our drive for fitness was gone.

Until we found calisthenics 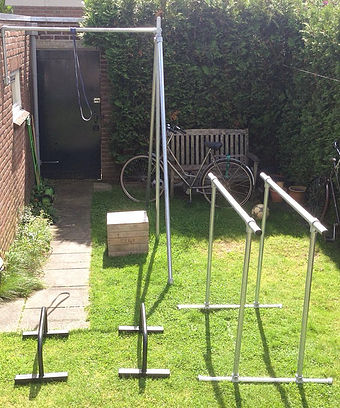 In comparison with weightlifting, we really loved the idea of full-body control and the challenging skills you are able to learn with Calisthenics. We got inspired by Calisthenics athletes and really wanted to become Calisthenics athletes as well. We started to do a lot of research on the internet. However, we didn’t find a good program so we started practicing ourselves. The only problem was that we were afraid of losing our muscles after 3 years of fitness. We were wondering: “Could we make muscle mass with Calisthenics?”.

Although we had our doubts about Calisthenics, we were just too passionate and inspired by all the athletes on the internet. So we just made the decision to fully commit our workouts to Calisthenics only. We can already tell you that this has been the best decision of our life!

So despite the fact that we didn’t know what to do or where to start, we just started training Calisthenics. We quit our membership at the gym and rebuilt our own backyard into some kind of a small Calisthenics park :). We only had a pull-up bar, dipping station, and later some parallettes (we actually made these parallettes ourselves).

We just started with the basics like push-ups, pull-ups, dips, and squats. By trying different training methods we got closer to our goals and eventually, we developed an effective and successful training method that allowed us to progress.

After 1 year of Calisthenics

Before we started we absolutely couldn’t do any Calisthenics skills. We were not able to stand on our hands, not even in a frogstand position. We couldn’t muscle-up or many pull-ups. We had some strength from fitness, but we were not flexible at all. We actually thought that we were pretty strong because we could bench press 100KGs, but that was no functional strength at all. However, after 1 year of hard work, consistency, and a lot of fun, we went from nothing to epic skills: 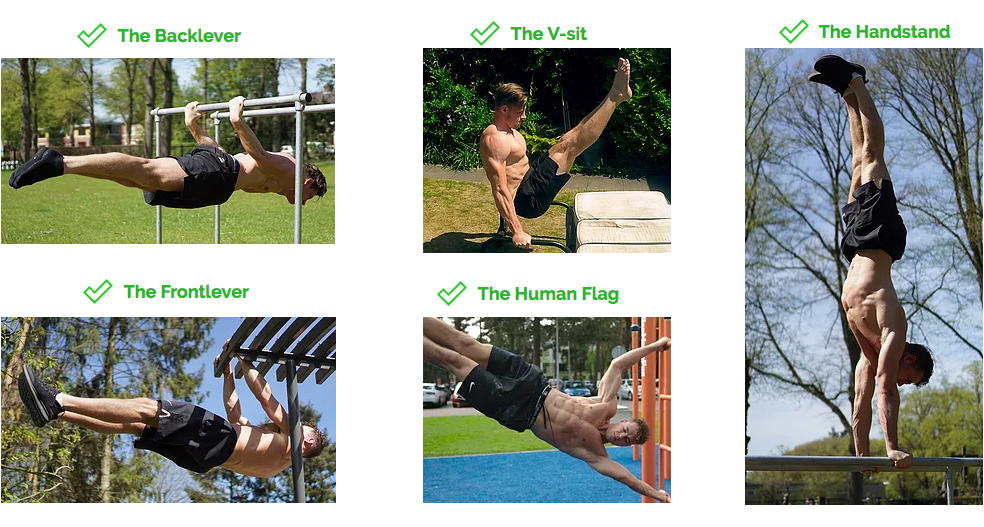 After 5 years of Calisthenics

Since we started with Calisthenics, we have learned that training with your own body weight, creates real functional strength which makes you able to control your own bodyweight for 100%. In the last few years, we have achieved a lot of new skills, inspired thousands of people, and in 2019 we even opened our own Calisthenics Family Gym where we now train almost daily, coach gym members, and create valuable YouTube videos and instructional videos.

We hope our story inspires you to start with Calisthenics. We also started from scratch, but if you believe in yourself, EVERYTHING is possible! 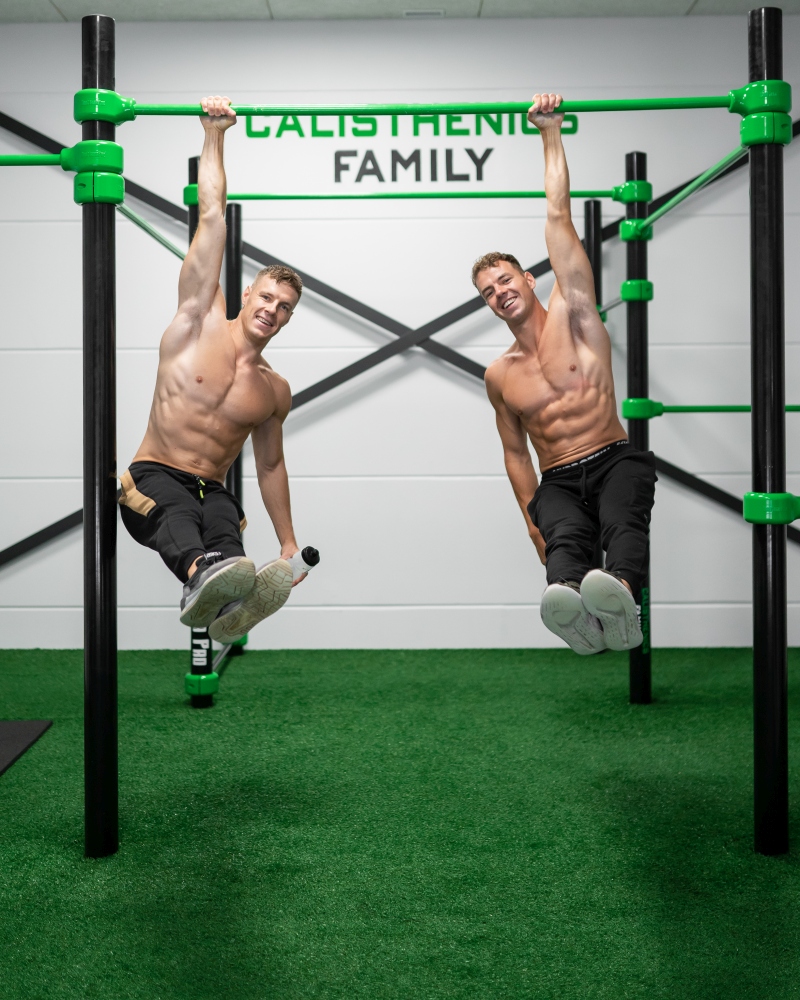 Get started with our FRee e-book

Would you like to achieve more with training than just “pumping up” your muscles? Or do you want to make effective progress with Calisthenics without wasting time?

Don’t make the same mistake as 70% of people by just trying something. This Calisthenics E-book is the most complete guide to start well prepared with your Calisthenics Journey! 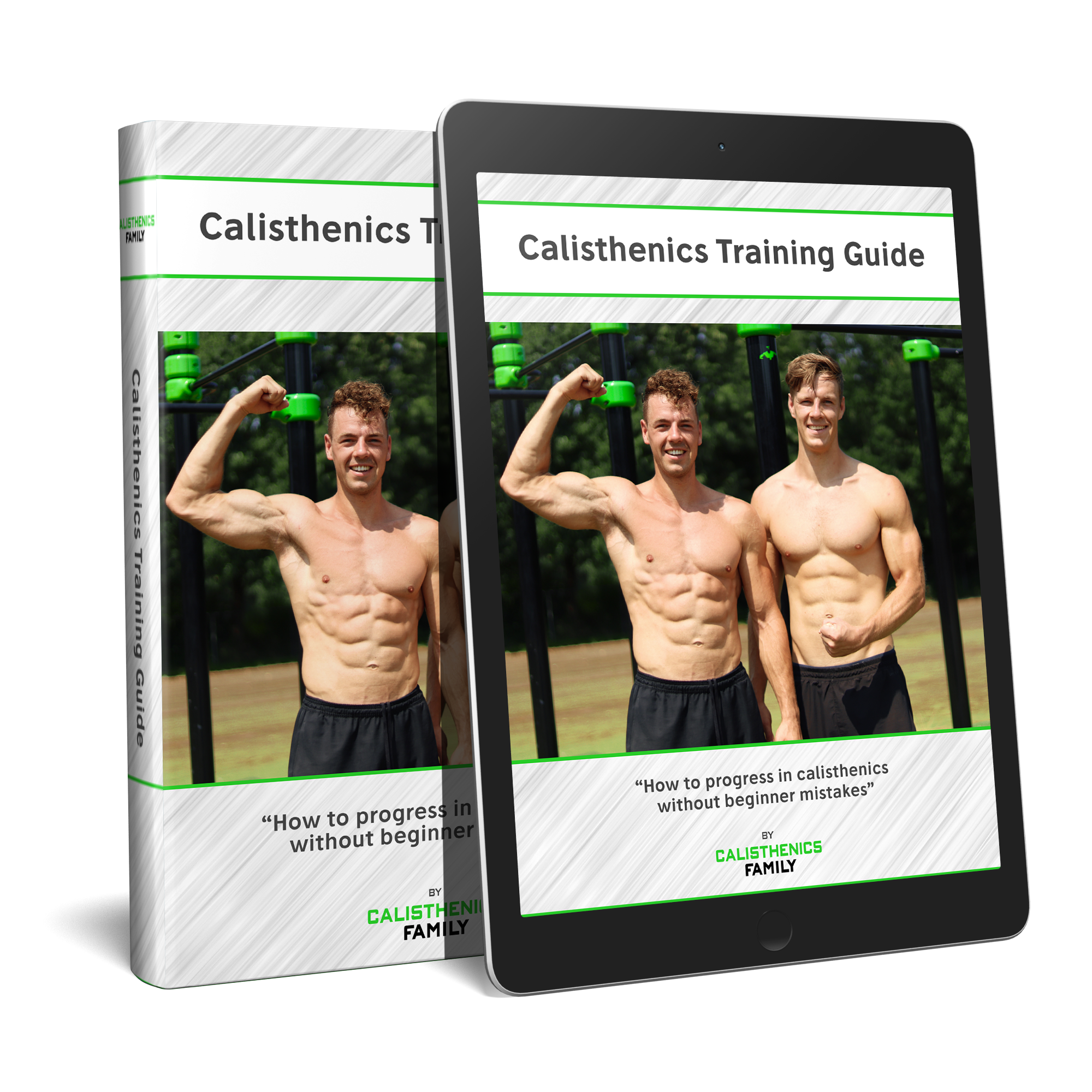 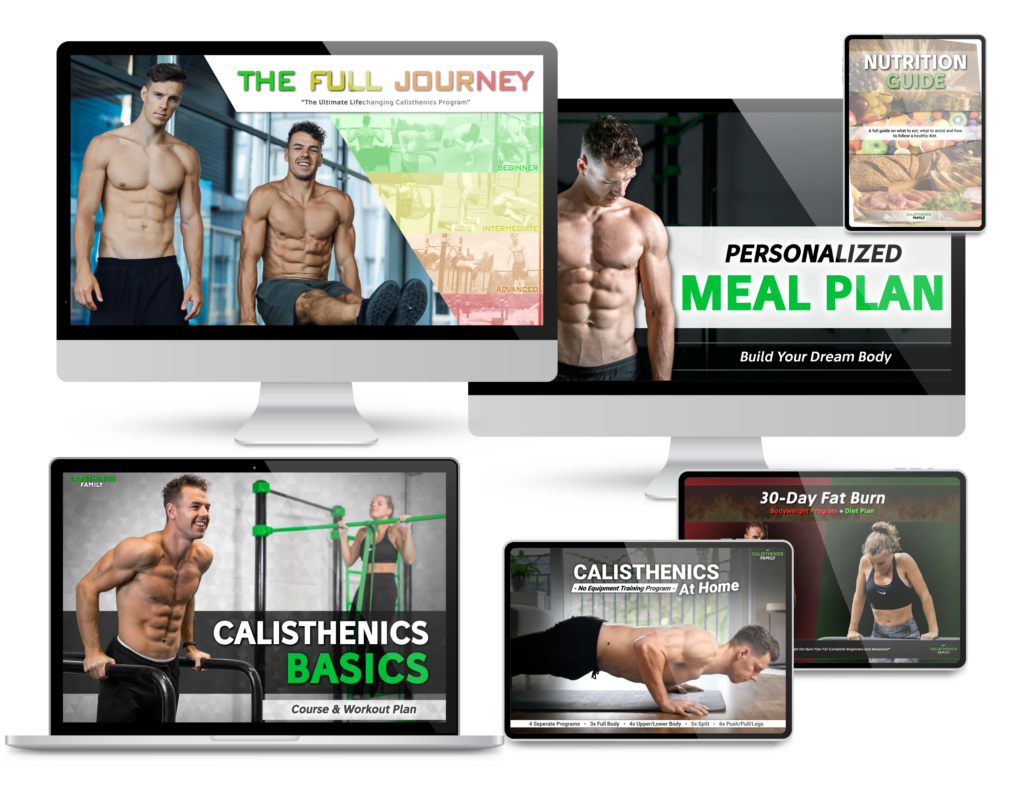 Make sure to take a look at our programs! Calisthenics Family has suitable programs for everyone and for every level!

More than 61082 people have already joined the Calisthenics Family! 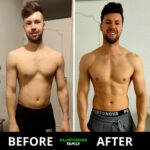 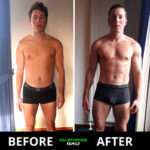 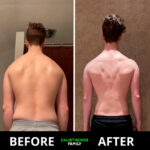 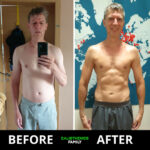 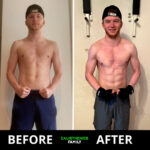 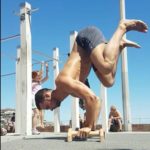 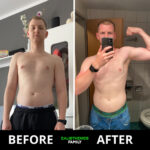 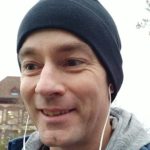 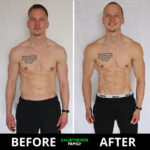 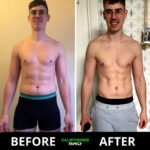 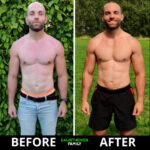 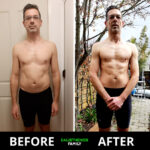 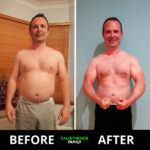 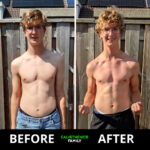 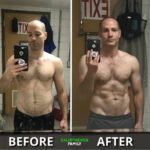 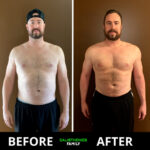 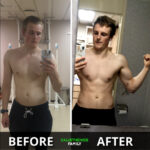 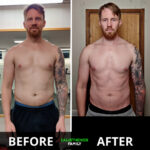 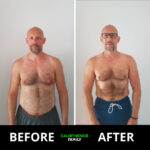